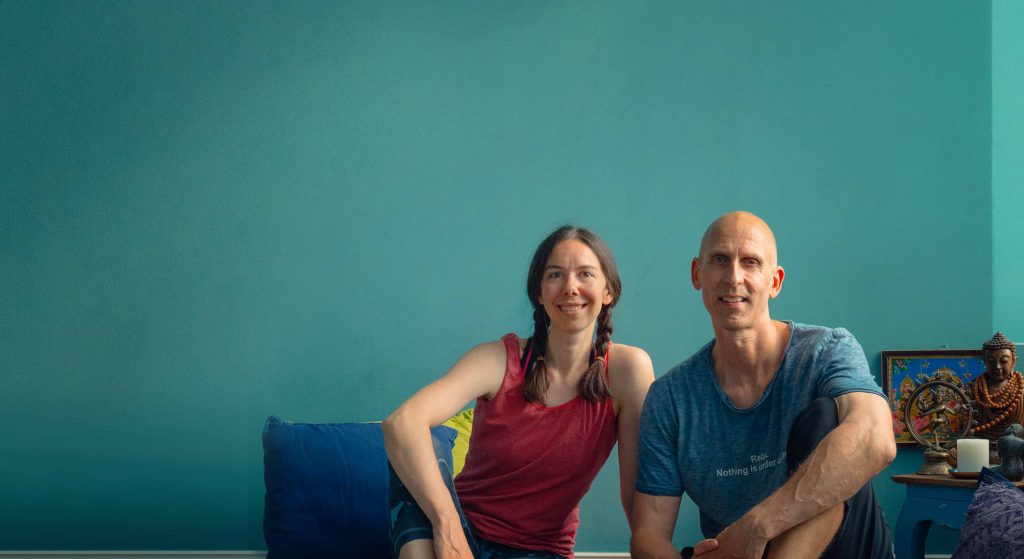 Eric and Eva’s yoga paths began on opposite sides of the world.
Eric discovered Ashtanga Vinyasa yoga while living in Toronto, Canada and began his yoga studies and practices under the guidance of Ron Reid, Diane Bruni & Marla Meenakshi Joy. Eva’s path began once she relocated to Hamburg, Germany where she began & refined her Vinyasa Flow and Ashtanga practices after many years of ballet study.
Over the years, Eric and Eva combined their Ashtanga Vinyasa practices with Vinyasa Flow and this became the foundation for Eric and Eva’s teachings.
Eric has spent time teaching internationally guiding workshops, retreats and teacher trainings while also learning from many wise teachers that have contributed to deepening his own practice on the mat and in daily life. Yoga Nidra is a passion of his and he regularly contributes to publications and online platforms like Yoga Journal & Insight Timer spreading the word and benefits of Yoga Nidra.
Both Eric & Eva are inspired by teachers who ‘enlighten’ them on topics like Tantra Yoga, functional anatomy & intelligent movement. They learn and follow the teachings of Peter Marchand, Swami Satyananda Saraswati, David Keil, Simon Borg-Olivier and Kathryn Bruni to name a few.

Having been travelling yoga teachers for the past few years and accumulating deeper knowledge and experiences in yoga, the time had come to create a yoga community they could call home that reflects their passions and values, so PEACE OUT YOGA was born along with their first son, Kai Noah. Two births within two months!

Today, both stay committed to their practices, sharing their experiences with anyone interested in listening.

Since our opening in 2016, our focus has been on providing students a safe, accessible & supportive environment, where they can feel inspired to explore themselves physically, emotionally & mentally through body movement, breath & the mind.
We deepen student awareness and practices that allows them to develop a passionate and sustainable holistic life with yoga.